I have not been fair to all the retailers hoping to make a killing today. I confess I haven’t blown my fair share of cash on Valentine’s day(s). As far as I can remmeber I have only taken a lady out once on Valentine’s day and that ended disastrously – no not the night itself, that just left me “feeling one way” or “feeling somehow” in a manner of speaking common where I grew up – I was instead referring to the whole courtship attempt.
So tonight was not any different from the same night for several decades. I meant the whole relationship or lack of it to be accurate and not because I didn’t want it to happen.

“What about bumble?” asks a concerned cousin over the phone, “I have a lot of luck there” he says as his voice drops lower. He’s married. I am past judging anyone. I have my excuse ready “Mormons don’t do bumble”. Of cos that’s not true, there are Mormons on bumble but most want a fellow member of the church.

Bernie (not his real name) says to me in the afternoon: “Any plans for tonight?”. He is my house mate or more accurately my tenant.
I answered “No not really.”
He says “Damn bro! Ok, Ok, are you getting any p**sy tonight?” he can be persistent (for lack of a better word). He is 23.
“Not likely” I said.
“Well James isn’t getting any for sure.” James (not his real name) is our other housemate who actually has a wife, a home, and kids in the next state some 10 hours away. He calls home every night to talk to his kids.
I laughed, “Well you can take one for the team.”
“Definitely bro! I will!”
I heard him rev his Porsche as he headed out about an hour later.

James comes home and asks if the clothes in the washing machine are mine. I said it is likely Bernie’s.
“Well, he needs to learn to do his laundry when he is going to be home. He should realize someone else might want to use the washing machine.”
I offered to go check on the machine. Since he had already washed the large blanket that was in it, I moved it to the dryer and set it to 50.
A lady I didn’t know had put up a flier in an Afro group I belong to for a movies night. I got dressed and headed out. There were only 4 of us there which I guess is a good thing – I assume all the others in the group had partners to spend the night with. It is actually a studio. We watched Midsommar which is a weird movie.
Afterwards, I considered going to a bar to hang out for a while, but then I realize most people out on the town would be in pairs and it was already going on 11 PM. Too late to get into trouble. I set google maps to take me home.

As I flew home doing 77 in a 70, I had “The house of the rising sun” on repeat on my car stereo. I had the beginning of a story involving a serial killer that murdered his victims to this particular soundtrack but it didn’t come together so I dropped it. I have written sporadically in recent times – it is strange how some memories come back to you when the context is right – “Go find someone you can impress by your writing” she had said.

The female electronic voice was my date for the night.

I left Minot on the fourth of January 2018 after having lived there for a year. My car was packed full of everything I could manage to fit into it. I then made my way to Southfield (MI) with the intention of staying with a cousin for a week or two. That didn’t work out as madam went rogue, so I checked into an AirBnB with a young couple. They had a couple of cats who mostly lived in their room. The bigger one was several years and wouldn’t give you the time of day. The young one was about 6 months or so and would make a dash for the couple’s room if you so much as looked at it. The apartment had two rooms and the room I stayed in was the AirBnB room and the single bathroom was shared. They gave me the run of the whole place which was nice. The only thing that was of concern (for their health) was that they smoked way too much – fortunately not inside the apartment – but even in the January “freeze” they made the trip to the balcony several times to go smoke when they were home.

After 10 days, I packed up once again and headed south to Indianapolis where I stayed with another cousin and his family. I slept on the couch in the living room throughout which suited me perfectly as it meant I could watch TV as much as I wanted. Of course I paid for my late nights when the kids boisterously get ready for school in the mornings. All these while, I kept churning out job applications like a mill. I finally got an invite for a job at HPE in Aplharetta (GA). After another 10 days or so I was back on the road. Checked into an AirBnB that had a curious set up. It was a fairly large house with three rooms upstairs. Two rooms including the one I stayed in shared a bath and the master had a bath en-suite. The ground floor had a kitchen and a fairly open area which was the living room. This had about 4 beds as it seems they were also had low-paying short staying tenants. There was a very young couple (late teens or so) that had sectioned off a part of the living room with a hanging sheet, and a couple of other guys also staying on the ground floor. I guess the AirBnB guests stayed upstairs. There was a lady as well as the person running the place on behalf of the actual host listed on the AirBnB website – he lived in the master bedroom. The house was in a quiet middle-upper class area and I understand people actually lease some of these vacant homes and then run them as AirBnB guest houses.

I thought the interview went well and after not getting any feedback from HPE after another week or so, I was back on the road to my big cousin’s place in North Carolina. It was while I was staying with my uncle that I got the invite for a video interview for the job with Oracle. I was interviewed by the lady (Ericka) who would be my manager and a colleague (John). The interview possibly lasted 15 to 20 mins but the questions were not particularly difficult. I got a job offer some days afterwards. Most days I drove to my aunt’s place in Charlotte (about 20 miles away) and spent the day with her.

After a couple of weeks, I set out across the country to Corona (CA) where I stayed another couple of weeks with another cousin. It was one of those new luxurious housing complexes with a swimming pool in the center of the courtyard. I never did make it into the swimming pool – I mostly watched TV all day with the intention of getting into the pool at least once before I left California – didn’t happen. Finally it was time for the last leg of my journey to Lehi (UT) where I resumed work. Excluding the local journey within each city where I had stayed, I had covered at least 5,300 miles and possibly closer to 6,000 miles all side trips factored in.

I have since then gone by air to New York (passport renewal) and Florida (on the job training), but to truly “cover” the country I need to (at least) get to Seattle or Portland at one end and maybe Maine at the other. 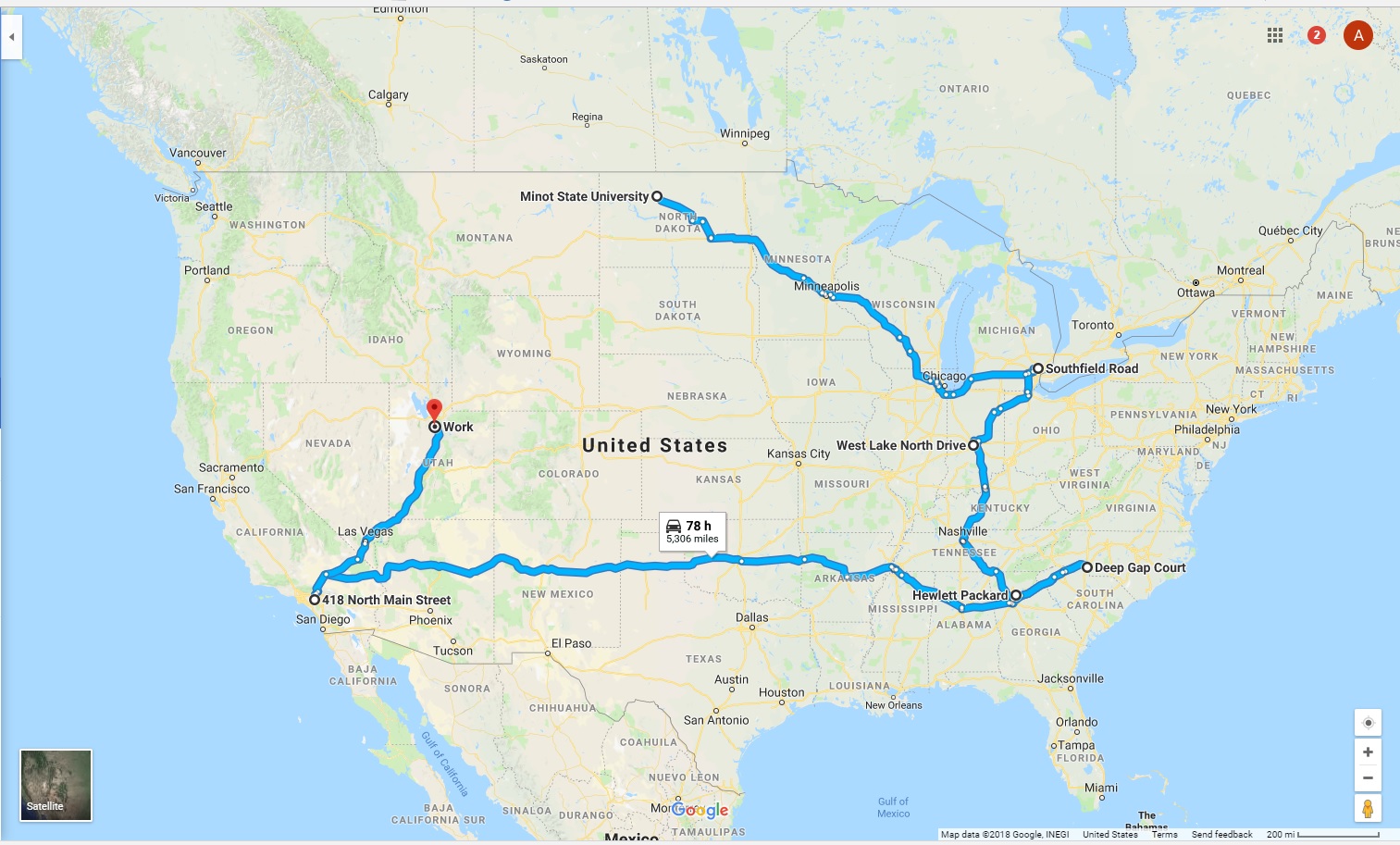