I don’t have a personal experience of any sort of eye surgery but I think I need to put this here in case someone considering Lasik sees it.

Just a word of caution to do your research. When it goes wrong it is supposedly life changing to the point some people are considering suicide. Google for bad effects such as starburst, ghosting, and dry eyes.

Make sure you consider the pros and cons before committing to it. There are just too much adverts on the TV which is of course paid for by their organization that I think it is almost evil that medicine has become commercialized to the degree it is especially in the US. “Schedule your “free” consultation now, the surgery is so quick and can be had for as low as $220 per eye. We even offer a payment plan ….”

Note I have nothing against the surgery but given the amount of people with negative outcome, it is worth warning people to do their research before having the surgery. I know one should do ones research for any surgical procedure but the medical profession is one of those (with good justification) that we tend to believe with little question. But this Lasik surgery thing is so glamorized on TV and other social media outlets it’s become disconcerting.

True, no one is getting out of life alive, but hopefully we have reasonably good health for as long as possible.

The Flame trees of Thika

I believe the first time I watched the TV-series “The Flame trees of Thika” was in the mid-80s. For some reason about 2 decades later I started thinking a lot about it. I tried several times over the past years to “find” it with no luck. Most of the references I got was to the book, but it was the film I wanted to watch. I finally got my hands on the series recently and found it as delightful as I had found it back then. There are lots of very interesting events and conversations in the series (actually a 7-part dramatization of the book), but one of the reason it seems to have stuck in my head is because of the event surrounding the making of the marmalade (I have lifted the conversation verbatim from the film).
The film comes highly recommended by yours truly.
Mrs. Nimmo – stirring the pot of marmalade on the fire:
Mrs. Nimmo: “What … on … earth … is that?”

Mrs. Nimmo – using the ladle to poke at the dead floating rat.
Juma (the cook): “How did that get there?”

Shrugging his shoulders (as usual)
Juma: “Perhaps it fell off from the ceiling.”

Mrs. Nimmo (disgusted): “Ewhh. Is that the custom of this kitchen? Do rats fall everyday from the ceiling, or do they jump up from the floor?”

Juma: “Rats come to sugar like brides to a rich man. I have told the mam-sab she must build a new kitchen as big and fine as the stables she builds for her horses, but she does not listen. So how can I keep the rats out?”

Mrs. Nimmo: “You can get rid of this one for a start.”
Mrs. Nimmo: “And then throw away the marmalade.”

Juma (is shocked and confused): “Throw away all these good sugar?”

After Juma gets rid of the rat.

Mrs. Nimmo: “Then pour the rest away.”

Juma still in shock (to himself): “Throw away good marmalade?”

I took the picture below at a hotel in Abuja. A colleague was staying there. The paper was tacked to the back of the bathroom door. 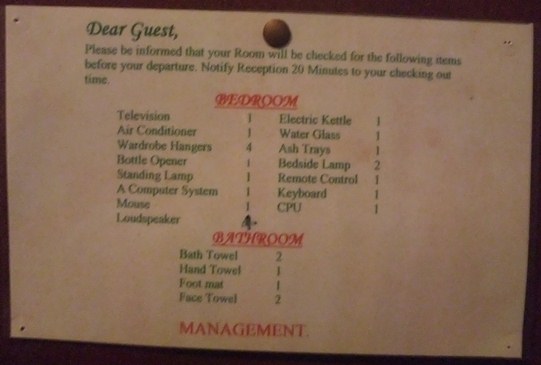 I think you will need an extra bag to cart all that away!!!!