I wish I had left my heart in Ibadan
Then I wouldn’t have to “off” the radio
Because words like “Love, really?, drama, form, familiarity, talking, seriously?”
wouldn’t bother me so much

I wish I had left my past in Ibadan
Forgotten Geography
along with places such as Akobo, Mokola, Theatre, Bodija
Remembering nothing that quickened my heartbeat

It was broad daylight when I left Ibadan, so I decided to take the old Ibadan-Lagos road  from Ibadan to Lagos. It took me through Ijebu-Ode along the Lagos-Epe road.

I can’t help but marvel at the church above (the few times I have taken this route – always from Lagos to Ibadan except today I was going in the opposite direction and it was during the day). I pulled over, got out of the car and went to stand in front of the fence. I was tempted to go inside because there was the outline of 2 apostles on the metal double-door.

The bridge
This bridge below is just before the church (below). Not sure what it is called. But I guess the Federal Govt. “Omotosho-Epe-Ajah 330KV DC Transmission Line” at one end of the bridge should serve as a reference point.

I parked the car after going over the bridge (I couldn’t stop for some time so I parked a fair distance away from the bridge). Then I walked back (taking pictures along the way). Anything to keep the thoughts going through my mind at bay.

It all reminded me of my father. A surgeon (first class) and a farmer. He had a love of the land. Sweating under the mid-day Sun as he made the yam mounds. I still remember once the non-nonchalance with which he used the hoe to kill a snake that suddenly popped up once when he was making those mounds. He practically didn’t miss a beat.
Of course at the time (every Saturday spent on the farm), the gnats weren’t so nice, but we still had to fertilize the corn, weed the cassava fields, and clean out the piggery if necessary (actually fun getting in the pens with the pigs). And there was the fish ponds, the cattle, and the goats and sheep. There was the Mango trees, the sweet Agbalumo tree.
What wouldn’t I give now to spend a Saturday on the farm with him.
I think the fact that you could find me with slippers in the house and walking barefoot outside on the road/compound has something to do with my growing up 🙂 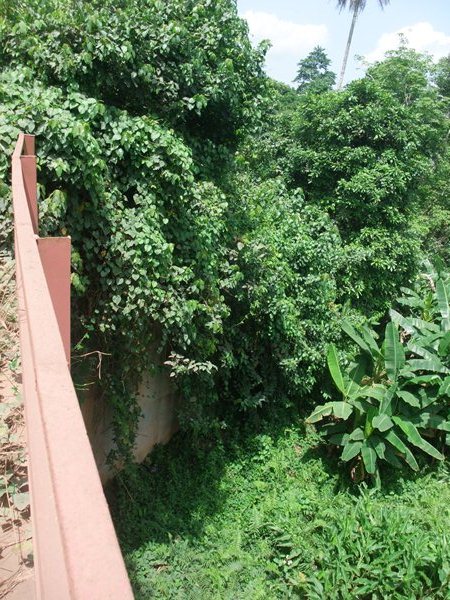 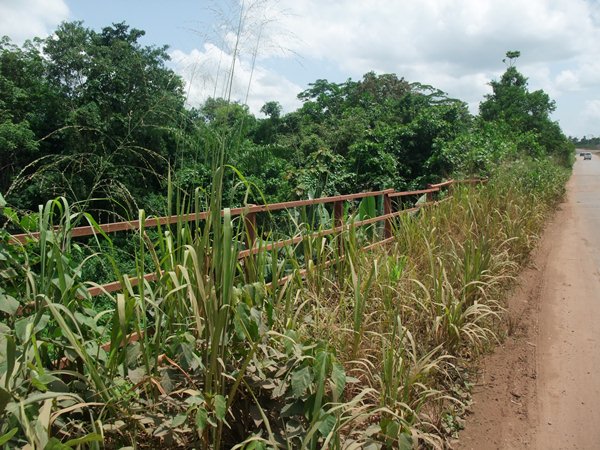 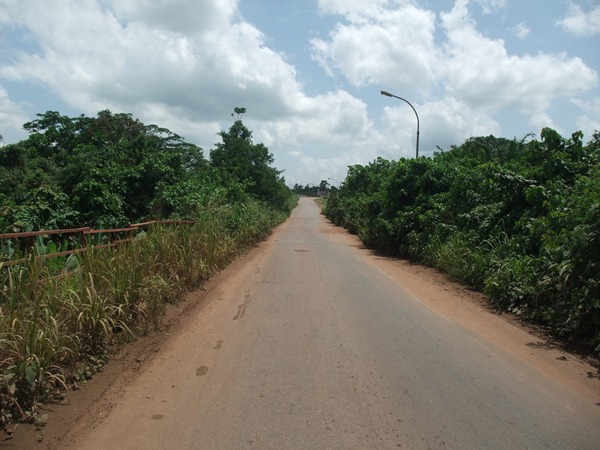 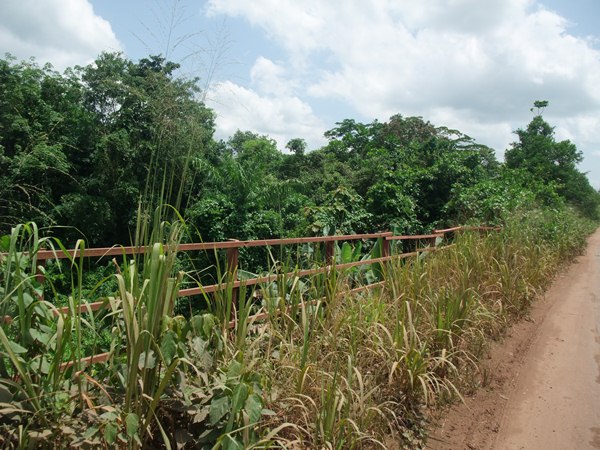 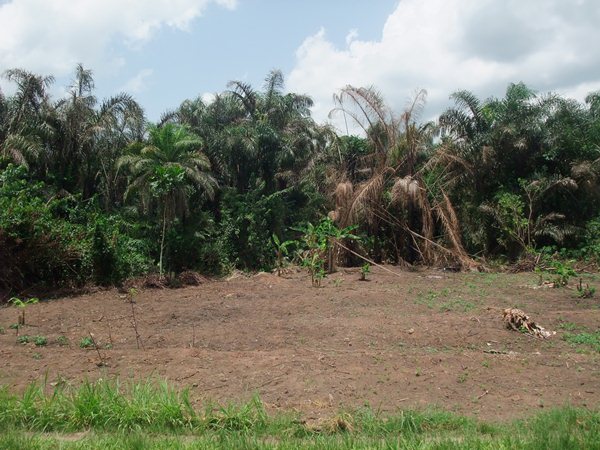 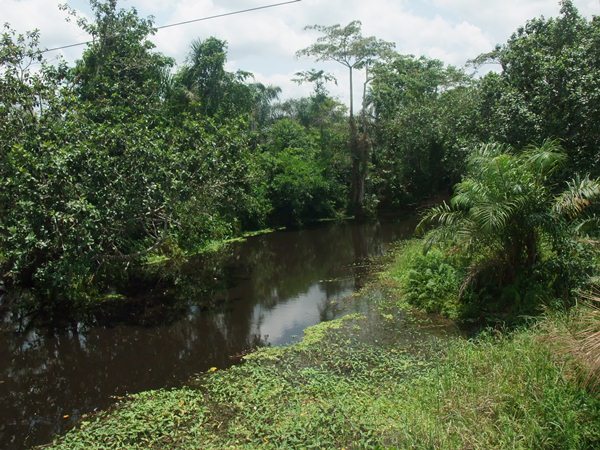 While taking photographs of the “creek”, a boat man came rowing midstream. I greeted him and asked if I could take his picture. He said to go right ahead. he even turned around the boat so I could get a good picture of him. He asked where I was from, and I said Lagos. 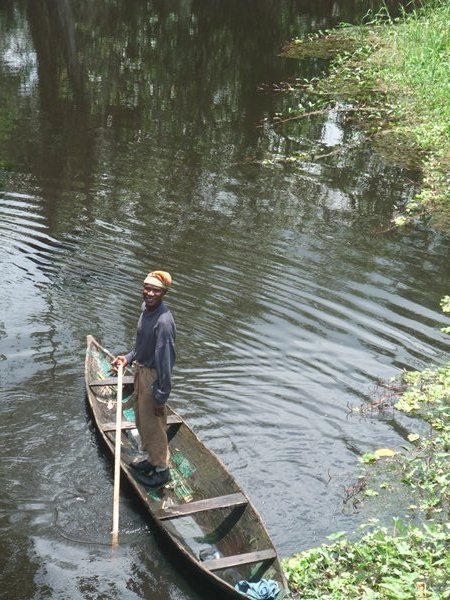 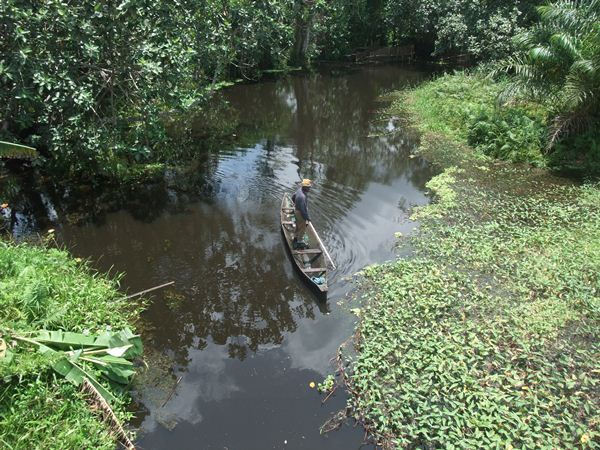 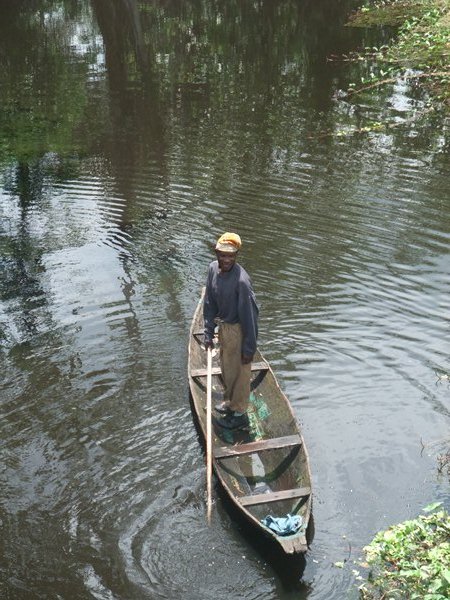 The other end of the bridge. The PHCN construction is just to the right.

The first “joint” where the bridge more or less started.

The pictures below were taken after I leaned over the bridge and greeted them. I asked if I could take their pictures. They didn’t understand me at first, but once they realised what I meant, they enthusiastically agreed.

Since they responded in Yoruba (but with the location at the back of my mind), I asked if they were Yoruba. The oldest boy told me that they were not Yoruba. That a lot of tribes were represented there. There were Ijaws, and other tribes. He himself was Togolese. I asked if he could speak French. he said very little. I greeted him “Bon joule”  to which he responded “Bon Joule madame”. We all burst out laughing at his mistake which he realised and I corrected (use Monsieur for men and madame for women)

Innocence.
Even the naked one in the group was willing to have his picture taken. I was the one that kept saying he should get in the water (since I was going to put up the pictures on my blog 🙂

Michael I think his name was. The most willing out of the group. He came up on the bridge afterwards to look at the pictures. Reporting to the rest that the pictures were very good.

Putting on a show for me (Michael I think). The little guy came up on the bridge, and jumped down into the water below! I asked him if he had done it before (jumped). He played along and pretended he hadn’t and it may be dangerous. I told him he was very brave. That I wouldn’t do it even if I was offered money!

Since they were all on the metal pipe, I told them I wanted to take a few more pictures. They decided to put the naked guy in the middle!

Back in the water!

I asked them what they did and they said “fish”. I said I didn’t think there would be big fishes in the water. they responded that it wasn’t the right season. That for now only small fishes are in the water.

I said goodbye. Once of them responded that I should “wash” the pictures. The others made fun of him!

It seems there are two ways we lose our “innocence” (the simple joy in being alive; in the wonders around us): age (growing up), and education.
Just after the bridge was a shed with a couple of kids under it. They were properly dressed and the bungalow in the background was probably their house. They were tending to a tray of smoked fish. I asked if I could take their picture and the boy said “Koni she she O!” (impossible!). Of course, it may just be superstition, who knows what I could do with the picture? Maybe “remote-control” them into slavery or money-making rituals! It contrasted heavily to the response I got a few meters away from the children and even men who were “closer” to the land.

The 25-liter plastic jerrycan collecting the real deal (palm-wine) from the palm tree!

The shed had various domestic items in it. I could also see a bottle of “Alomo” or whatever the aphrodisiac in the small green plastic bottle is called.

The other end of the bridge.

Village visit or consulting the “Babas”?

The car in the picture is a 2-door coupe.

The state of Nigeria

Loot from the Route!

The watermelon cost N600, the 6 mangoes cost N100, and the real poison (palm-wine) cost N500. After taking the pictures of the boys, it suddenly dawned on me that it would be a crime to leave the area (with all the palm-wine smell heavy in the air) without sampling some of it. There was a shed just a few meters up the road from where I had packed my car selling the good stuff 🙂
The plastic bottle is for size reference purposes. I bought the Mangoes and Watermelon at the T-junction (Epe/Ogun/Lagos).
I find it difficult to haggle too much with people selling food stuff. I think about all the effort it takes to grow them, the farmers and sellers under the fierce Sun … and I think how easy I may spend the same amount on something not even relevant such as a bottle of drink or a lunch …