I found a CD containing some Visual Basic (VB5) codes I had written a while back (Surds and Arabic-to-Roman-Numerals) and decided to re-live what the IDE looked like then. I have never really been a programmer (People life Prof. Dayo, Shina and Adan “Java” come to mind) because if there is a word lighter than lightweight, that’s what I should use for the few codes I have written. I guess trivial is a better word as lightweight in programming has a completely different meaning

But that’s not the point of this post. It’s more to buttress the pace at which technology changes. I found Visual Basic 5 on the freedownloadmanager.org website under the Windows abandonware section and installed it on my system. During the installation, I came to the component selection screen below and was drawn to the meagre disk space requirement  (compared to the multi-GB requirements of some newer coding platforms).

Look at the screen-grab below and see if you can tell what’s odd before scrolling down: 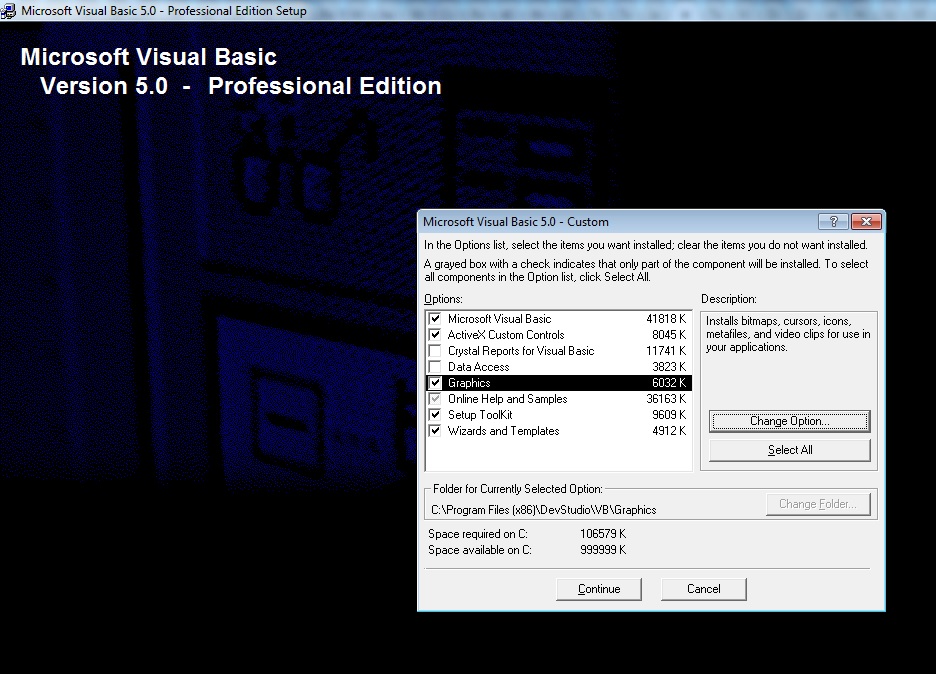 It’s the “Space available on C:” value! It’s set to “999999 K” which is just under 1GB. I am too lazy to go check what sort of hard disk sizes were predominant in 1997 but I suspect, whoever wrote this part of the installer probably used a field with only 6 digits in it a la “640K ought to be enough for anybody.” quote by the big boss himself (Bill Gates). So I guess the logic would be something like “if we get some value back that overruns the field just set it to the max supported value which would be 999999 since it’s unlikely there will be many of those disks around. We can’t code for every negligible corner case right?”
I am not berating the programmers: I just wanted to use it to point out the rapid pace of technological development.

The laptop I installed it on had a 476GB Hard Disk Drive (HDD) with 131GB free space. Since that field in the installer was expressed in KiloBytes (KB), they would have required 9 digits instead of the 6. People code smarter now of course. “Human-friendly form” would result in the value been converted to GB or TB (etc) which reduces the field’s required number of digits.

And the VB5 IDE was just 20 years ago. Of course in computing, that’s another era/lifetime.

End Note: Bill Gates has always denied ever making the statement above. So why didn’t I remove it? Some things are part of computing lore. That quote is one of them.